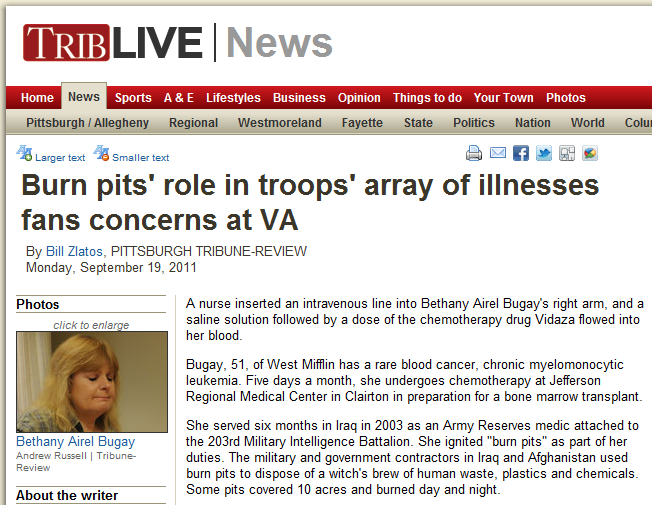 Bethany was featured in an article this morning on the burn pits that have been standard operating procedure for getting rid of waste in war zones by the U.S. military for the last decade. Soldiers who have been in the vicinity of these burn pits have come down with all sorts of illnesses, including leukemia.

The comparison is made for these “burn pits” as being something like the “Agent Orange” of this generation of soldiers. There is in fact an extensive class action lawsuit being filed not against the military (whose standard policy this is), but against Kellogg, Brown, & Root and Halliburton, the government contractors which became responsible for operating the burn pits. (I don’t believe my wife will be eligible to be part of the lawsuit; she was in Iraq from April-October 2003, which was prior to Halliburton’s arrival there). But as the article notes:

The Department of Veterans Affairs has commissioned the Institute of Medicine to conduct a study for release this fall to determine whether Bugay’s cancer and the illnesses of perhaps thousands of other veterans of Iraq and Afghanistan are linked to exposure to the burn pits. If so, that would make them eligible for disability benefits from the VA. About 2.2 million members of the military have served in Iraq and Afghanistan since 9/11.

There are more photos here showing showing some of Bethany’s service, and her exposure to the burn pits; I’ve outlined her illness and treatment in recent blog posts.

Yesterday someone sent me a link to the website of an attorney who’s been following “burn pit” stories and activities, and keeping an updated collection of burn pit claims in the news. There, I found a link to an official Department of Veterans Affairs document which outlines, among other things “guidance on handling claims for disabilities potentially resulting from exposure to environmental hazards while on active duty.” I was heartened to see, in this document, the weight to be assigned to the Veteran’s own testimony about his or her illness:

Because scientific studies regarding health effects from exposures are in the preliminary stages, raters should carefully review the nature, dates, and locations of the Veteran’s military service, and apply the law under a broad and liberal manner, consistent with all available facts and circumstances. Claims should be evaluated on a case-by-case basis with evidentiary weight given to medical examinations and opinions from both private and VA physicians. In all cases, the benefit of the doubt shall be given to the Veteran.

The VA has also put up a burn pit website. The photo here is from the “officially unclassified” account that was published by the 203rd MI BN’s own account of Operation Iraqi Freedom. Beth says that there were probably “dozens” of these burn pit barrels burning at any given time. It’s hard to avoid exposure on a day to day basis, much less avoiding exposure when you’re working on these things.

This photo was taken at the Talil Air Base, Iraq (now is Ali Air Base). It’s been officially released by the 203rd MI BN in their unclassified (CD .ppt) account of Operation Iraqi Freedom, November 2002-November 2003. Beth also was located at the Baghdad International Airport (BIAP), Iraq, and she did quite a bit of running in Northern Iraq, around Mosul. (She was nearby when Saddam’s sons were killed in a gunfight).

I'm a co-founder, principal, and producer at ABMarketingLeads.com. We are a collective of highly skilled demand generation resources with a proven set of technology tools to help clients generate qualified leads, both for their ABM programs, and for their standard lead generation efforts.

Here is a little about me:

In the past, I have used this site to discuss various long-term adversities, including two job searches.

I have also written extensively about my wife’s struggle with and eventual victory over “CMML” (“chronic myelomonocytic leukemia”) via her December 14, 2011 bone marrow transplant.